Brickipedia
Register
Don't have an account?
Sign In
Advertisement
in: Class 2 articles, Sets listed for ages 6+, Miscellaneous,
and 4 more

The Easter Bunny (also called the Easter Rabbit or Easter Hare) is a folkloric figure and symbol of Easter, depicted as a rabbit bringing Easter eggs. Originating among German Lutherans, the "Easter Hare" originally played the role of a judge, evaluating whether children were good or disobedient in behavior at the start of the season of Eastertide. The Easter Bunny is sometimes depicted with clothes. In legend, the creature carries colored eggs in his basket, candy, and sometimes also toys to the homes of children, and as such shows similarities to Santa Claus or the Christkind, as they both bring gifts to children on the night before their respective holidays. The custom was first mentioned in Georg Franck von Franckenau's De ovis paschalibus ('About Easter Eggs') in 1682, referring to a German tradition of an Easter Hare bringing Easter eggs for the children. 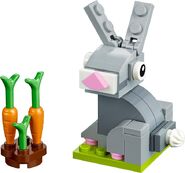 £2.49 +
Released
April 1 - April 30, 2020 +
ShopDescription
Want to buy a great Easter gift that doesn … Want to buy a great Easter gift that doesn’t involve chocolate? Give kids a gift that will last them beyond the holiday season with April’s Monthly Mini Build (40398). This 44-piece playset contains bricks to build a gray Easter bunny complete with a cute white bobtail and its own carrot patch. Mini builds make ideal pocket-change treats and are a great way to introduce kids to LEGO® brick building – each month there's a new build to discover in your nearest LEGO store.</br></br>* Delight kids with the anytime treat of a collectible LEGO® Monthly Mini Build. April’s comprises a model of a cute gray Easter bunny and 2 carrot elements.</br></br>* A great Easter gift for kids aged 6 and up who love adorable animal toys that will last far longer than the holidays. With 44 pieces, this easy-to-build model is the ideal introduction to the LEGO® brick-built universe.</br></br>* This Easter bunny measures over 1” (5cm) wide and 2” (6cm) high, making it perfect as a neat desk display. Or it can be combined with any other LEGO® sets for a truly imaginative playtime.GO® sets for a truly imaginative playtime. +
Theme
Monthly Mini Model Build +
Title
Easter Bunny +
Type
Set +
USPrice
$2.99 +
Advertisement