Brickipedia
Register
Don't have an account?
Sign In
Advertisement
in: Class 2 articles, Sets listed for ages 8+, 2020 sets,
and 3 more
English

Miscellaneous
40409 Hot Rod is a Miscellaneous Promotional set released on June 1, 2020. It was released with eligible purchases of over $85 on LEGO.com during June 2020.

Hot rods are typically old, classic, or modern American cars that have been rebuilt or modified with large engines modified for more speed and acceleration. One definition is: "a car that's been stripped down, souped up and made to go much faster." However, there is no definition of the term that is universally accepted and the term is attached to a wide range of vehicles. Most often they are individually designed and constructed using components from many makes of old or new cars are most prevalent in the United States. Many are intended for exhibition rather than for racing or everyday driving

The origin of the term "hot rod" is unclear. For example, some say that the term "hot" refers to the vehicle's being stolen. Other origin stories include replacing the engine's camshaft or "rod" with a higher performance version. According to the Hot Rod Industry Alliance (HRIA) the term changes in meaning over the years, but "hot rodding has less to do with the vehicle and more to do with an attitude and lifestyle." For example, hot rods were favorites for greasers. 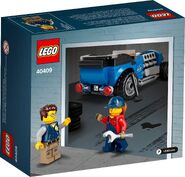