Brickipedia
Register
Don't have an account?
Sign In
Advertisement
in: Class 2 articles, Sets listed for ages 10+, 2020 sets,
and 6 more
English

Harry Potter
40412 Hagrid & Buckbeak is a BrickHeadz Wizarding World set that was released on September 1, 2020.

Professor Rubeus Hagrid was an English half-giant wizard. Hagrid attended Hogwarts School of Witchcraft and Wizardry in 1940 and was sorted into Gryffindor house. In Hagrid's third year, he was framed by Tom Riddle for the crime of opening the Chamber of Secrets and using his pet Acromantula to attack several Muggle-born students and eventually killing one of them. Though Hagrid's wand was snapped and he was expelled, he was trained as gamekeeper of Hogwarts and allowed to live on the school grounds at the request of Albus Dumbledore.

Buckbeak, later renamed Witherwings, was a male hippogriff. He lived with Rubeus Hagrid during Harry Potter's third year at Hogwarts, along with a few other hippogriffs. He was later unfairly sentenced to death, when he attacked Draco Malfoy after being taunted and provoked. Buckbeak's death sentence was delivered from the Committee for the Disposal of Dangerous Creatures. Many of the members of this committee had been threatened by Draco's father, Lucius Malfoy, into voting for that verdict. Harry Potter managed to rescue Buckbeak, who eventually returned to live with his master in peace. 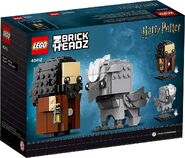 x12px 19.99 € +
Released
September 1, 2020 +
ShopDescription
LEGO® Hagrid™ & Buckbeak™ (40412) is a mag … LEGO® Hagrid™ & Buckbeak™ (40412) is a magical gift for fans of the Harry Potter™ movies and collectors of BrickHeadz™ models. Hagrid is unmistakable, with his mass of black hair, long brown coat, lantern in one hand and his favorite pink umbrella in the other. The Buckbeak model features distinctive white plumage from the top of his head down to his beak. Both collectible characters are presented on sturdy baseplates, perfect for play and display.</br>* This collectible LEGO® BrickHeadz™ set shows Hagrid™, the famous Hogwarts™ gamekeeper, with his beloved Buckbeak™, the Hippogriff.</br>* Hagrid™ holds a lantern and his famous wand hidden inside a pink umbrella.</br>* With 270 pieces and standing more than 3” (9cm) tall, this set is suitable for anyone aged 10 and up.set is suitable for anyone aged 10 and up. +
Theme
BrickHeadz +
Title
Hagrid & Buckbeak +
Type
Set +
USPrice
$19.99 +
Advertisement