Brickipedia
Register
Don't have an account?
Sign In
Advertisement
in: Class 2 articles, Sets listed for ages 7+, 2020 sets,
and 3 more
English

Super Mario
40414 Monty Mole & Super Mushroom Expansion Set is a Super Mario promotional set that was designed by Jeremy Luettgen[1] and released in July 2020. Along with 77907 Toad's Special Hideaway, it is one of the rarest Super Mario sets.

The set’s biome is Desert, represented by yellow bricks, and the set’s only exclusive, interactive part is the Stone-Eye, who sits crookedly on a flipper. To defeat him, Mario must stomp on the POW block on the flipper, causing the Stone-Eye to fall onto the next flipper in the set. Mario can then stomp on the Stone-Eye’s right temple, generating several coins for him, and if he stomps on the temple hard enough he can launch the Monty Mole hiding in the tan structure of the set. Mario can then stomp on the Monty Mole for a few coins.

The tan structure has a few brown bricks in it, and it has a tan roof attached to an axle to (temporarily) protect the occupant inside from harm. The set has four green studs, two of which are near the tan structure, another that has a pink flower and usually sits on the set’s frontmost area, and another that is next to the Stone-Eye’s flipper; these are the set’s only flora. The set’s background consists of a simple tan ‘wall’ that is only half of Mario’s height. The set’s frontmost part is a little tile intended to carry a Super Mushroom sitting on a brown block.

Unless counting the Stone-Eye or Super Mushroom, the set’s only figurine is a short, brown, cubic brick-built figure with short legs and somewhat flat arms or hands: Monty Mole. It takes one stomp to defeat.

Monty Moles are enemies that appear in several Mario games, where they dart out of holes in the ground to either quickly pursue the player or throw rocks at them. They also frequently appear in Whac-A-Mole-themed minigames across the franchise. They seem to have initially been based on the Rocky Wrench enemy from Super Mario Bros. 3 (itself described as a mole-like turtle at the time), but became a much more recurring enemy, with Rocky Wrenches eventually being redesigned to look like Monty Moles.

Stone-Eyes are giant gray stone heads that debuted in New Super Mario Bros. U. They appear to be based off of the Moais of Easter Island, and also bear a passing resemblance to Thwomps. In New Super Mario Bros. U, New Super Luigi U and New Super Mario Bros. U Deluxe, they mostly inhabit desert-themed levels, and either move in numerous different patterns (e.g. swaying, up and down, to the left or right, etc.) or are completely stationary. Based on their movement patterns, they can assist or hinder players. A small Stone-Eye can be seen in the Records Toad House on Secret Island. 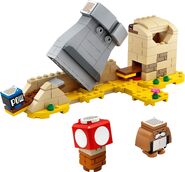