Brickipedia
Register
Don't have an account?
Sign In
Advertisement
in: Class 3 articles, Sets listed for ages 10+, 2020 sets,
and 3 more
English

Seasonal
40425 Nutcracker is a BrickHeadz Seasonal set that was released on October 1, 2020.

The Nutcracker is an 1892 two-act ballet, originally choreographed by Marius Petipa and Lev Ivanov with a score by Pyotr Ilyich Tchaikovsky (Op. 71). The libretto is adapted from E. T. A. Hoffmann's story "The Nutcracker and the Mouse King".

Although the original production was not a success, the 20-minute suite that Tchaikovsky extracted from the ballet was. However, the complete Nutcracker has enjoyed enormous popularity since the late 1960s and is now performed by countless ballet companies, primarily during the Christmas season, especially in North America. Major American ballet companies generate around 40% of their annual ticket revenues from performances of The Nutcracker. The ballet's score has been used in several film adaptations of Hoffmann's story.

Tchaikovsky's score has become one of his most famous compositions. Among other things, the score is noted for its use of the celesta, an instrument that the composer had already employed in his much lesser known symphonic ballad The Voyevoda. 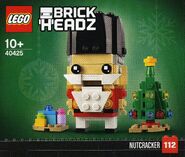 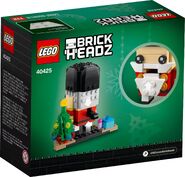 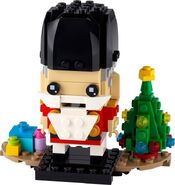 $9.99 +
Released
October 1, 2020 +
ShopDescription
LEGO® BrickHeadz™ Nutcracker (40425) recre … LEGO® BrickHeadz™ Nutcracker (40425) recreates the Nutcracker Prince from the famous Christmas story. This special BrickHeadz toy incorporates an open-and-close mouth and, in keeping with the Christmas theme, comes complete with Christmas tree and presents. The model has its own character ID and a sturdy baseplate for easy display, either individually or alongside other BrickHeadz models. Great gift for BrickHeadz collectors and any kid at Christmas.</br></br>* This collectible building set lets kids construct a fun LEGO® BrickHeadz™ model of the prince who was turned into a nutcracker in the famous Christmas story.</br></br>* A great gift for kids, fans of LEGO® bricks and anyone at Christmas, this building set provides an age-appropriate build-and-play experience for ages 10 and up.</br></br>* Combine with other LEGO® BrickHeadz™ models to create an impressive collection.</br></br>* Standing over 3” (9cm) tall, this 180-piece buildable toy delivers magical fun for kids at Christmas and any other time of the year. Christmas and any other time of the year. +
Theme
BrickHeadz +
Title
Nutcracker +
Type
Set +
USPrice
$9.99 +
Advertisement