Brickipedia
Register
Don't have an account?
Sign In
Advertisement
in: Class 3 articles, Sets listed for ages 10+, BrickHeadz,
and 4 more
English

The Maneki-neko (Simplified Chinese: 招财猫) is a common Japanese figurine which is often believed to bring good luck to the owner. In modern times, they are usually made of ceramic or plastic. The figurine depicts a cat, traditionally a calico Japanese Bobtail, with a paw raised in a Japanese beckoning gesture. The figurines are often displayed in shops, restaurants, pachinko parlors, dry cleaners, laundromats, bars, casinos, hotels, nightclubs, and other businesses, generally near the entrance. Some Maneki-neko are now equipped with a mechanical paw which slowly moves back and forth.

Maneki-neko come in different colors and styles and vary in degrees of detail. Common colors are white, black, and gold. In addition to statues, Maneki-neko can be found in the form of keychains, piggy banks, air fresheners, pots, and numerous other media. Maneki-neko are sometimes referred to simply as "lucky cats". 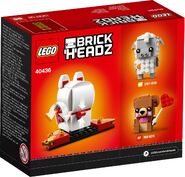