Brickipedia
Register
Don't have an account?
Sign In
Advertisement
in: Class 2 articles, Sets listed for ages 8+, BrickHeadz,
and 2 more
English

As a herding dog, German Shepherds are working dogs developed originally for herding sheep. Since that time, however, because of their strength, intelligence, trainability, and obedience, German Shepherds around the world are often the preferred breed for many types of work, including disability assistance, search-and-rescue, police and military roles and acting. The German Shepherd was the third-most registered breed by the American Kennel Club in 2020, and seventh-most registered breed by The Kennel Club in the United Kingdom in 2016. 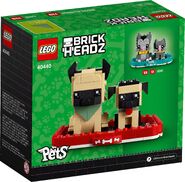 $24.99 +
Released
January 2, 2021 +
ShopDescription
Kids who love pets will adore this BrickHe … Kids who love pets will adore this BrickHeadz™ dog and puppy, build-and-display set. The German shepherd wears a bandanna and has a movable tail, and the puppy looks very cute with his little red tongue sticking out. The dogs sit together on a sturdy baseplate in a decorated basket, making this buildable pet set a great gift for all kids, BrickHeadz collectors and pet lovers.</br></br>* Collectible construction set featuring fun LEGO® BrickHeadz™ models of a German shepherd dog and a puppy sitting together in a basket.</br>* Standing over 3” (8cm) tall, this 247-piece model features a bandanna, movable tail and a decorated dog basket.</br>* A great gift for LEGO® fans, BrickHeadz™ collectors and pet lovers aged 8 and up.™ collectors and pet lovers aged 8 and up. +
Theme
BrickHeadz +
Title
German Shepherd +
Type
Set +
USPrice
$14.99 +
Advertisement