Brickipedia
Register
Don't have an account?
Sign In
Advertisement
in: Class 2 articles, Sets listed for ages 8+, BrickHeadz,
and 2 more
English

The goldfish is a freshwater fish in the family Cyprinidae of order Cypriniformes. It is commonly kept as a pet in indoor aquariums, and is one of the most popular aquarium fish. Goldfish released into the wild have become an invasive pest in parts of North America.

Native to East Asia, the goldfish is a relatively small member of the carp family (which also includes the Prussian carp and the crucian carp). It was first selectively bred for color in imperial China more than 1,000 years ago, and several distinct breeds have since been developed. Goldfish breeds vary greatly in size, body shape, fin configuration, and coloration (various combinations of white, yellow, orange, red, brown, and black are known). 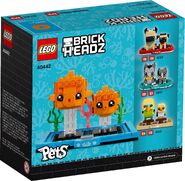