Brickipedia
Register
Don't have an account?
Sign In
Advertisement
in: Class 2 articles, Sets listed for ages 10+, BrickHeadz,
and 4 more
English

Scrooge McDuck is a cartoon character created in 1947 by Carl Barks for The Walt Disney Company. Appearing in Disney comics, Scrooge is a Scottish-American anthropomorphic Pekin duck. Like his nephew Donald Duck, he has a yellow-orange bill, legs, and feet. He typically wears a red or blue frock coat, top hat, pince-nez glasses, and spats. He is portrayed in animation as speaking with a Scottish accent. Originally intended to be used only once, Scrooge became one of the most popular characters in Disney comics, and Barks's signature work. Scrooge lives in the city of Duckburg (which is also Donald Duck's, and Huey, Dewey, and Louie's home city) in the fictional US state of Calisota (a blend of California and Minnesota), whose claimed location is in California in the real-world United States.

Huey, Dewey, and Louie are triplet cartoon characters created by writer Ted Osborne and cartoonist Al Taliaferro, and are owned by The Walt Disney Company. Huey, Dewey, and Louie are the nephews of Donald Duck, sons of Della Duck, the grand-nephews of Scrooge McDuck, and the friends of Webby Vanderquack. Like their maternal uncles, the brothers are anthropomorphic white ducks with yellow-orange bills and feet. They typically wear shirts and colorful baseball caps, which are sometimes used to distinguish them, since Louie always wears green, Huey wears red, and Dewey wears blue. Huey, Dewey, and Louie have made several animated appearances in both films and television, but comics remain their primary medium. The trio are collectively the 11th most published comic book characters in the world, and outside of the superhero genre, second only to their uncle Donald. 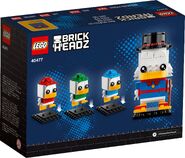