Brickipedia
Register
Don't have an account?
Sign In
Advertisement
in: Class 2 articles, Sets listed for ages 8+, 2021 sets,
and 2 more
English

Hamsters are more crepuscular than nocturnal and, in the wild, remain underground during the day to avoid being caught by predators. They feed primarily on seeds, fruits, and vegetation, and will occasionally eat burrowing insects. Physically, they are stout-bodied with distinguishing features that include elongated cheek pouches extending to their shoulders, which they use to carry food back to their burrows, as well as a short tail and fur-covered feet. 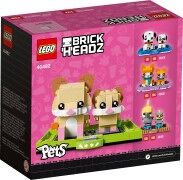