Brickipedia
Register
Don't have an account?
Sign In
Advertisement
in: Class 4 articles, Sets listed for ages 5 - 12, 40000 sets,
and 3 more
English

41003 Olivia's Newborn Foal is an Friends set released in 2013. It includes a watering station, a tree, a trough, a wheelbarrow, Olivia and a foal.

One of the three segments in the set is a trough, it stands on a small green 4x8 flat brick, in front of the trough there is a piece of hay which is a yellow 1x2 brick which ridged edges. The trough is mainly dark tan, the bottom of the trough is a 2x8 dark tan brick, on top of it at the end of both sides there’s two grey pieces with holders, where you can hold a brush, carrot or other accessories, in-between these are light grey pieces with edges, inside them are 4 transparent blue studs. On each side at the top of the grey holding pieces, there’s two 1x2 dark tan bricks, and brick colored brick shaped 1x2 bricks on top of them. On the right side there’s a white brick with a hole in it where you can place the ribbons that come in the set, behind it there’s a 1x1 dark tan brick, on the opposite there is a dark tan 1x2 brick, on top of each of these there's two dark tan 1x6 arch pieces. On top of the arch pieces there are 3 2x3 slanted maroon bricks, on top of them there’s a 1x6 flat pink brick.

The last segment is the watering station its set on a 3x2 green flat brick, at the front side there’s two 1x2 grey drain pieces, sitting on it there’s a brown bucket with a dark tan handle. Behind the tiles is a green 1x2 brick with a hole in the middle on the top of it there’s two grey cylinder pieces with a black brick with two holes at each side on top of it, on one side there’s a tap and on the other there’s a grey and black handle.

The set also comes with a red wheel barrow, inside there are many accessories all which are light purple, the accessories include: 2 different types of ribbons 3 of each, a bar of soap, there is 2 types of brushes an oval shaped one and a circle shaped one there is 2 of each, there is also a bottle which has a love heart printed on each side of it.

The set includes a foal- He has long legs with big rounded feet, two connected together at the front and back the space between the legs is where he can connects to studs. His legs lead up to his body, at the back he has a short tail which is connected to his body, on his body there is a stud where bricks can sit, beside it there's a place she can wear accessories, such as crowns and bows. He has a short bended neck along the back of his neck there’s is main. His face is also bended, he has brown eyes with black and white pupils over his eyes are eyelashes.

The set includes one mini-doll-Olivia wears a light blue skirt, white shoes and a violet top printed with a partially-white design she has light nougat arms and hands. She carries a carrot. 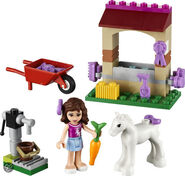 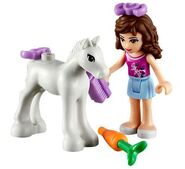 Olivia with her foal 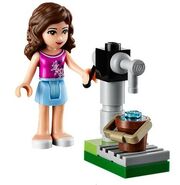 Olivia at the water station 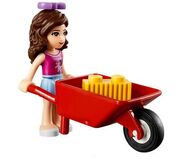 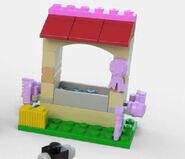 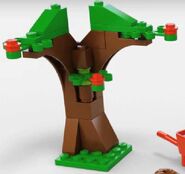 £9.99 +
Released
2013 +
ShopDescription
Take care of the Newborn Foal! Take … Take care of the Newborn Foal!</br></br>Take care of the newest arrival in the Heartlake City stables with Olivia and fun accessories! Get water from the moving pump to fill up the trough and feed the foal with the carrot! Then use the wheelbarrow to collect the hay for the foal under the buildable tree. Groom her with the accessory pack including ribbons, brushes and combs to make her very pretty! Includes Olivia mini-doll figure.</br></br>*Includes Olivia mini-doll figure</br>*Features a foal, tree, wheelbarrow and moving water pump, shelter with trough</br>*Accessories include a bucket, hay, flowers, a carrot, prize ribbon and a grooming accessory pack with bows, brushes, combs and ribbons</br>*Move the water pump up and down!</br>*Collect the hay with the wheelbarrow!</br>*LEGO® Friends pieces are fully compatible with all LEGO bricks</br>*Collect all of the LEGO Friends sets for a whole world of LEGO Friends fun!</br>*LEGO mini-dolls are LEGO figures made especially for the world of LEGO Friends that can be customized and combined in thousands of ways</br>*Measures over 3" (9cm) high, 2" (6cm) wide and 6" (16cm) longcm) high, 2" (6cm) wide and 6" (16cm) long +
Theme
Friends +
Title
Olivia's Newborn Foal +
Type
Set +
USPrice
$9.99 +
Advertisement