Brickipedia
Register
Don't have an account?
Sign In
Advertisement
in: Class 4 articles, Sets listed for ages 5-12, 40000 sets,
and 3 more
English

41011 Stephanie's Soccer Practice is a Friends set released in 2013. It includes Stephanie and Scarlett.

The set has four different sections, including:
A cream goal with red and white on the top sitting on grass.

A practice section, which is four orange cones sitting on light and dark green grass.

A shooting area, which has grey and white TECHNIC pieces which are used for shooting the football into the set in the goal.

The main portion of the set is a rest area, which is a small piece of shade with is made with white and lime bricks with pink flowers and flat blue pieces on top. Underneath is a pinkish purple bench which has a transparent pink cup and a banana sitting on it. Beside the rest area there is a water dispenser made with transparent blue pieces and white pieces a blue button and a grey tap piece, and on the other side there is red flowers.

The set also includes Scarlett, who wears a blue ribbon, a bone, and an exclusive white soccer ball with a purple triangle with a white star inside printed on it.

The set includes one minidoll- Stephanie. She has her regular blonde hair and her regular face, blue eyes, a smile with her teeth showing decorated with pink lipstick and a nose. Stephanie has a white jersey with the number 7 in purple in the top right corner. Half of her arms are covered in light blue sleaves. She also has dark blue jeans and sneakers with the front half dark blue, the back half white with laces.

Stephanie plays for Heartlake High's soccer team, after playing the game she takes a break on the bench and plays fetch with Scarlett. 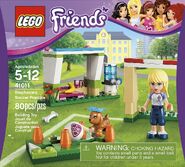 €9.99 +
Released
2013 +
ShopDescription
Shoot, score and have a ball at Stephan … Shoot, score and have a ball at Stephanie's Soccer Practice!</br></br>Train with Stephanie for the big soccer game! Dribble the soccer ball through the cone obstacle then practice guarding the goal with the goal-shooting function! Practice hard then take a quick break on the bench and refuel with the water from the cooler and a banana. After some tough training, play fetch with Scarlett. Includes Stephanie mini-doll figure and her dog, Scarlett.</br></br>* Includes Stephanie mini-doll figure and Scarlett</br>* Features goal, ball, soccer ball launcher, cone obstacle course, water cooler, banana, cup, flowers and bench</br>* Practice guarding the goal with the goal-shooting function!</br>* Kick the ball through the cone obstacle course!</br>* Guard the goal!</br>* LEGO® Friends pieces are fully compatible with all LEGO bricks</br>* Collect all of the LEGO Friends sets for a whole world of LEGO Friends fun!</br>* LEGO mini-dolls are LEGO figures made especially for the world of LEGO Friends that can be customized and combined in thousands of ways</br>* Measures over 2" (6cm) high, 1" (3cm) wide and 10" (27cm) longm) high, 1" (3cm) wide and 10" (27cm) long +
Theme
Friends +
Title
Stephanie's Soccer Practice +
Txt1
Stephanie +
Type
Set +
USPrice
$9.99 +
Advertisement