Brickipedia
Register
Don't have an account?
Sign In
Advertisement
in: Class 4 articles, Sets listed for ages 5-12, 40000 sets,
and 5 more
English 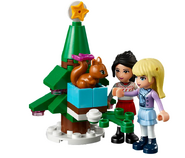 Stephanie and Lily with the squirrel and Christmas tree.

Stephanie and Lily at the market stall.

x12px $59.99 +
Released
2013 +
ShopDescription
Count down to Christmas with the LEGO® … Count down to Christmas with the LEGO® Friends!</br></br>Count down to a LEGO® Friends Christmas this December! Build the holiday story with Stephanie on her journey to the Christmas market! Take her snow scooter past all of the holiday-themed scenery you’ll find hidden inside. Then stop off for presents, snacks and some winter fun with ice skating! Find animals, build decorations and help her to get ready for the best holiday in Heartlake City! Includes Stephanie and Lily mini-doll figures with 24 buildable surprises in a calendar with 24 secret compartments.</br></br>*Includes Stephanie and Lily mini-doll figures</br>*Features 24 gifts, each enclosed in its own compartment in a LEGO® Friends holiday-themed calendar</br>*Open a new compartment each day and count down to Christmas with buildable gifts!</br>*Collect 24 buildable surprises including a snow scooter, sled, snowman, ice skates, brown squirrel and a Christmas tree!</br>*LEGO® Friends pieces are fully compatible with all LEGO System bricks</br>*Collect all of the LEGO Friends sets for a whole world of LEGO Friends fun!</br>*LEGO mini-dolls are LEGO figures made especially for the world of LEGO Friends that can be customized and combined in thousands of ways</br>*Measures over 2" (7cm) high, 9" (25cm) wide and 3" (8cm) deepcm) high, 9" (25cm) wide and 3" (8cm) deep +
Theme
Friends +
Title
Advent Calandar +
Type
Set +
USPrice
$29.99 +