Brickipedia
Register
Don't have an account?
Sign In
Advertisement
in: Class 4 articles, Sets listed for ages 5-12, Friends,
and 3 more
English

41025 Puppy's Playhouse is a Friends set released in September of 2013. It includes a Puppy resembling a golden retriever. It’s one of the three sets of Friends Animals series 3.

The main building of this set is a kennel – similar to the Puddle’s little palace but smaller to provide shelter for a smaller inhabitant. It is constructed on a 4x6 green plate using white, tan and pink elements as well as 1x2 nougat bricks with moulded brick pattern. The steep lavender roof is decorated with orange flowers. Outside on the right of the entrance there is another growing plant – this time a red flower.
The playground is represented by a seesaw used for agility training. The pink 2x6 plate swings on the axis made of two 1x2 white bricks with pins and a brown 1x2 brick with a hole. It’s base is a 2x4 lime plate.
The puppy can be decorated by a medium blue bow and fed by a bone placed on an orange plate. 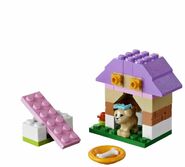 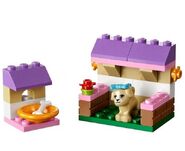 The set presented at the Toy Fair