This set consists mostly of one large build representing the palace in Atlantica from the Disney's The Little Mermaid. The outer portion of the lower level of the palace includes an entranceway, with an undersea picnic table off to the side. Inside the lower level, two dressing rooms for Ariel (mini-doll) and her sister form the base of the palace. On one side of the palace's second level is a music studio for Ariel, complete with a piano. A giant seashell sits in the center, and a slide from the top level ends on the other side. A small treasure trove of human things can be built separately from the palace itself.

The major color tones for the set are light yellow, pink, and gold. While there are not many new molds in this set, there are a number of elements that appear in new colors or have new, unique printing on them.

The set includes two mini-dolls: Ariel and her sister Alana (who is a new figure unique to this set). They are accompanied by animal figures of Flounder, Sebastian, and a blue dolphin.

Make beautiful music under the sea with Ariel and her friends!

Dive right into an incredible underwater adventure with Ariel, her sister Alana and her friends Sebastian and Flounder! Help Ariel and Alana get ready for a concert in their dressing room with vanity and sofa. Then put on a show-stopping performance with the gang on the piano, maracas and microphone. Admire Ariel’s collection of bits and pieces from the human world in her secret grotto, and frolic in the waves with Flounder and a friendly dolphin. Help Ariel enjoy some sweet treats with her friends and when the day is done, slide her through a trap door, down a slide and straight into her clamshell bed. It’s all up to you! First have fun building Ariel’s Undersea Palace. Then it’s time to play! Includes Ariel and Alana mini-doll figures, plus Sebastian the crab, Flounder the fish and a dolphin. 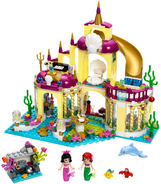