A toy store or toy shop is a type of retail business specializing in selling toys. The first toy store was founded in 1760 by William Hamley in London, under the name of “Noah’s Ark”, later renamed to Hamleys. The famous toy store in New York City, FAO Schwarz, was founded under the name Schwarz Toy Bazaar. It was founded in 1862 by the German immigrant, Frederick August Otto Schwarz. The former largest toy retailer in the United States, Toys “R” Us, started business in 1948 by Charles Lazarus, a veteran of World War II. In 2015, FAO Schwarz closed, and did not reopen until after Toys “R” Us went bankrupt in 2018. 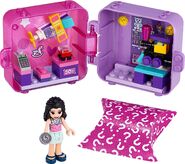 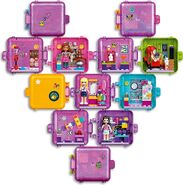 $12.99 +
Released
April 1, 2020 +
ShopDescription
Make flexible fun your focus when you give … Make flexible fun your focus when you give the gift of LEGO® Friends Emma’s Shopping Play Cube (41409). Tucked inside the shell of this compact toy is a miniature toy store. It’s a top gift for kids who love portable toys.Thinking outside the box<br>These LEGO Friends cubes are a fresh way to play. The elements of this pretend play store are removable, so kids can enjoy imaginative play outside the box. The pieces also attach to the cube's base for fuss-free fun on the move and no more missing bricks! Cubes split in half so kids can share the toy store play with a friend.Fun in the frame<br>There are 5 Shopping Play Cubes to collect. Each portable toy has a mystery pet in a random color – discovering the surprise inside is part of the fun! The stackable toy has side hinges that connect to the other cubes, so kids can create a fun display. Introduce kids to the world of Heartlake City, a place where everyday heroes are waiting to greet them with a warm welcome!* Inspire creative play with LEGO® Friends Emma’s Shopping Play Cube. Inside the cool playset is a miniature world of toy store fun. Watch kids open the case and delight as they discover the cute mystery pet inside.* There’s so much inside this portable toy to make for the best journeys. Included is 1 collectible mini-doll and a toy pet, along with a buildable toy car, plane and train. The sticker sheet lets kids customize the cube.* There are lots of ways to play with this top gift. Kids can stack or connect their cubes to display them in creative ways or split them to share the fun. They can take the bricks out or use them inside the cube.* This building set is an ideal travel toy. And those new to the LEGO® world should breeze through the easy build. This collectible mini-doll set makes a great impulse reward, birthday or holiday gift for kids aged 6+.* The cube measures just over 3” (8cm) wide and 2” (6cm) high making it the ideal little treat to keep kids entertained on long journeys. It will add a pop of color to any desk, without taking up too much space.* Because no batteries are needed, the creative play starts right away and never ends. Toy store fun is guaranteed wherever kids find themselves: in the car, on a plane, or in the playground at school!* LEGO® Friends toy playsets let boys and girls lose themselves in a welcoming world of adventure and friendship, where they can have fun reliving the scenes from the TV series or create new stories of their own.* LEGO® fun toys meet the highest industry standards plus The LEGO Group’s own stringent quality criteria. Kids building this toy playset will find the bricks connect strongly and pull apart easily every time.* At The LEGO Group we drop, heat, bite, scratch and test LEGO® bricks and pieces in every way imaginable to guarantee that every LEGO Friends set meets the highest global safety and quality standards.ghest global safety and quality standards.
Theme
Friends +
Title
Emma's Play Cube - Toy Store +
Txt1
Emma +
Type
Set +
USPrice
$9.99 +
Advertisement