A coffeehouse, coffee shop, or café is an establishment that primarily serves coffee (of various types, e.g. espresso, latte, cappuccino). Some coffeehouses may serve cold drinks such as iced coffee and iced tea; in continental Europe, cafés serve alcoholic drinks. A coffeehouse may also serve food such as light snacks, sandwiches, muffins, fruit or pastries. Coffeehouses range from owner-operated small businesses to large multinational corporations. Some coffeehouse chains operate on a franchise business model, with numerous branches across various countries around the world.

While café may refer to a coffeehouse, the term "café" generally refers to a diner, British café (colloquially called a "caff"), "greasy spoon" (a small and inexpensive restaurant), transport café, teahouse or tea room, or other casual eating and drinking place. A coffeehouse may share some of the same characteristics of a bar or restaurant, but it is different from a cafeteria. Many coffeehouses in the Middle East and in West Asian immigrant districts in the Western world offer shisha (actually called nargile in Levantine Arabic, Greek and Turkish), flavored tobacco smoked through a hookah. An espresso bar is a type of coffeehouse that specializes in serving espresso and espresso-based drinks.

From a cultural standpoint, coffeehouses largely serve as centers of social interaction: a coffeehouse provides patrons with a place to congregate, talk, read, write, entertain one another, or pass the time, whether individually or in small groups. Since the popularization of Wi-Fi, coffeehouses with this capability have also become places for patrons to access the Internet on their laptops and tablet computers. A coffeehouse can serve as an informal club for its regular members. As early as the 1950s Beatnik era and the 1960s folk music scene, coffeehouses have hosted singer-songwriter performances, typically in the evening. 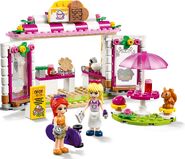 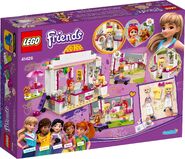 $29.99 +
Released
August 24, 2020 +
ShopDescription
Know a kid who loves hanging out with thei … Know a kid who loves hanging out with their friends? Give the gift of the Heartlake City Park (41426) and every day they can make-believe catching up with their buddies in this Parisian-styled hang-out.So many ways to play<br>Foodie kids will love playing with the toy coffee shop accessories imagining they're the server whipping up smoothies and waffles to give to hungry customers. This building toy's kitchen is filled with neat details. The hinged waffle iron, drinks blender and cooking ingredients all help get kids’ creative juices flowing. Youngsters can also pretend to be Mia on her skateboard toy, playing with the squirrel toy while she waits for a snack.Toys with heart<br>LEGO Friends sets transport scenes from the TV show’s Heartlake City into kids' bedrooms, where they can recreate stories they loved or invent those of their own. In the company of LEGO Friends Mia, Stephanie, Andrea, Emma and Olivia, kids can explore their passions with friends that are ‘just like them'.* Whet appetites for hours of creative fun food play with this Heartlake City Park Café (41426). Kids can play the server with a toy menu, prepare the toy food, or imagine being the customer enjoying a snack.* This café playset comes with 2 mini-dolls, a squirrel figure, a kitchen with a toy waffle iron and blender and lots of toy coffee shop accessories that help kids get lost in play and develop their story-telling skills.* Kids can pretend to make the food, wait the table or play the customer. And as this LEGO® park café is compatible with all LEGO sets and bricks, the ways in which they can customize their set are limitless.* Makes a great holiday, birthday or impulse gift for kids aged 6+ who love food play. With 224 pieces it serves up a satisfying but achievable construction project for kids new to LEGO® building toys.* The café building measures over 4” (11cm) high, and 5” (14cm) long so it takes little room to keep out on display. And who wouldn't want to show off this pretty Parisian-style eatery complete with cute French doors?* Kids will want no delay to the creative park play so good news, this coffee shop playset requires no batteries, meaning the fun can start straightaway.* Like all awesome LEGO® Friends toys, the Heartlake City Park Café comes with clear instructions that kids aged 6+ will find easy to follow. So, take a break while your little builder takes care of the construction!* Help youngsters explore their interests with colorful LEGO® Friends Heartlake City playsets. With them kids can recreate scenes from the TV series or invent stories of their own.* LEGO® building kits meet the highest industry standards. They’re consistent, compatible and connect easily every time, and it’s been that way since 1958.* LEGO® Friends sets are stringently tested to make sure every building kit meets the highest global safety and quality standards.ghest global safety and quality standards.
Theme
Friends +
Title
Heartlake City Park Café +
Txt1
Mia +
Txt2
Stephanie +
Type
Set +
USPrice
$19.99 +
Advertisement