Surgeo is mostly white in color. His head is mainly a tall, mint colored rectangular shape. It has two horns on his head, a grey head mirror on the middle, two eyes on each side with a mint rim surrounding them, and 3 white spikes of some sort on the top. He has five sharp teeth; three on the top, two on the bottom. His body is azure with a large white stripe running down the middle. His jaw is mainly white with an azure pattern on the top with a cabinet-like pattern on his body. His left arm is grey with a white accent at the top holding a black hammer, while his right arm is entirely grey and resembles a syringe. He has short, bowed legs with grey feet, with a white pattern on the bottom and a single mint toe on each foot. 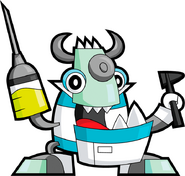 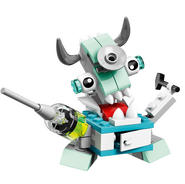 Meet Mixopolis General Hospital’s top … '</br>Meet Mixopolis General Hospital’s top surgeon Surgeo!</br></br>With a medical cabinet for a body and a syringe arm, Surgeo is always equipped and ready to perform an operation. This hyper Mixel never sleeps and lives for the sound of the emergency bell. Surgeo may not be the calmest of the Medix, but they couldn’t ask for a more energetic and enthusiastic leader.</br>*Get set to operate with top surgeon Surgeo of the LEGO® MIXELS™ Medix tribe.</br>*Surgeo features a head that turns upside down for different expressions, opening medical cabinet body design, syringe arm and posable joints, plus a reflex hammer element.</br>*Collect all 3 Medix in LEGO® MIXELS™ Series 8 to build the MAX!</br>*Combine with 41566 Sharx from the Pyrratz tribe to create a fun new MIX!</br>*Go to LEGO.com/mixels for exclusive building instructions, games, animations and much more.</br>*Watchall Template:Sic your favorite MIXELS™ characters on Cartoon Network.</br>*This set includes an age-appropriate building experience for ages 6 and over.</br>*Stands over 2” (6cm) tall.es 6 and over.