The set contains 124 pieces, which are used to build a small stormtrooper. The set utilizes slanted pieces as eye slits, and exclusive printed tiles as the filtration system. The E-11 blaster is a combination of multiple pieces, and the main body is a large build consisting of multiple pieces and a large printed tile as the chestpiece. 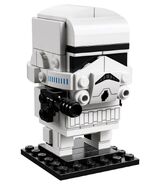