Brickipedia
Register
Don't have an account?
Sign In
Advertisement
in: Class 3 articles, Sets listed for ages 7 - 14, 2011 sets,
and 2 more
English

4194 Whitecap Bay is a Pirates of the Caribbean: On Stranger Tides set released on April 18, 2011. It contains 746 pieces, including a light brick.

The set consists of a lighthouse and some associated structures. The lighthouse itself has three levels. The lower room includes the entrance, a table, 2 stools, a slab of gold, glass bottle, and a tool for mapmaking. The central room features two wheels built into one wall. The upper area houses the light brick. A magnifying glass piece focuses the rays of light so that it gives the effect of a spotlight. There is a short stairway at the front leading up to the entrance. To the left is a large oil drum and a barrel of gold coins. Pulling a cross axle causes the oil drum to fall and spill its contents, which is four black 1x1 round bricks. To the right of the lighthouse is a narrow storage room and a shed housing a cannon that launches a net. The set also includes two rowboats.

The main lighthouse structure is designed to collapse. Sliding a bar above the doorway knocks out the walls of the middle level, causing the lamp room above to crumble. The functioning net cannon is mounted on rails so it can slide in and out of its shed, which features opening double-doors. 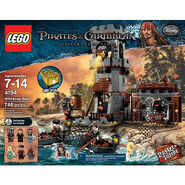 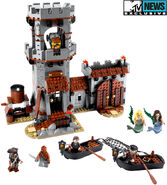 A promotional image of the set 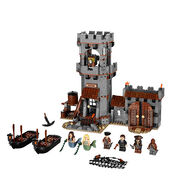 A Zombie with cannon

The cannon in situ

x12px $169.99 +
Released
April 18, 2011 +
ShopDescription
Snag a sea siren without destroying Whi … Snag a sea siren without destroying Whitecap Bay!</br></br>Captain Jack Sparrow and his band of pirates are lying in wait, plotting to capture one of the mysterious mermaids of Whitecap Bay. Hide inside the lighthouse, then use the searchlight to spot them in the murky depths below. Shoot the net from the boathouse cannon when they get close to shore! Beware of the whale oil barrels tipping near the open flames!</br></br>* Includes 6 minifigures: Jack Sparrow, Philip, Scrum, Syrena, pirate and mermaid</br>* Features lighthouse, boathouse, rowboats, net-shooting cannon and working searchlight</br>* Includes flame elements, gold bricks and coins</br>* Use the cannon to launch the net!</br>* Tip the whale oil barrel!</br>* Use the explode function to create chaos in the lighthouse!</br>* Searchlight really lights up!</br>* Row the rowboats with the oars!</br>* Measures over 10” (25cm) tall and 12” (30cm) wide</br>* Rowboats measure over 4” (10cm) long and 1” (2cm) wide</br>* Includes free poster! and 1” (2cm) wide
Theme
Pirates of the Caribbean +
Title
Whitecap Bay +
Txt1
Captain Jack Sparrow +
Txt2
Philip Swift +
Txt3
Syrena +
Txt4
Tamara +
Txt5
Scrum +
Txt6
Gunner Zombie +
Type
Set +
USPrice
$79.99 +
Advertisement