4195 Queen Anne's Revenge is a Pirates of the Caribbean: On Stranger Tides set released in April 2011. It consists of a large model of the ship, The Queen Anne's Revenge, and contains minifigures of Jack Sparrow, Blackbeard, Angelica, Chef, Quartermaster, Yeoman Zombie, and Gunner Zombie.

The Queen Anne's Revenge is the ship commanded by Blackbeard in the fourth Pirates of The Caribbean movie, On Stranger Tides. The ship comprises a large, brown hull with black-and-crimson sails and features a skeletal motif throughout. The ship has six gun ports, though only three cannons are included. A large, black, bone-built lamp hangs from the stern, while the bow features a burning skeleton, with bone rails running along the sides and a skull bannister marking the rear. More bones and skeletons adorn the captain's quarters, which contains a map and some smaller lamps. The ship features three tall masts on the main deck, and a bowsprit at the front. The anchor can be raised and lowered using a functional winch.

The floor of the deck is dark brown, although it has some light brown and grey bricks on it. On the right side of the deck are three canons, each of which can fire through a flap in the ship's wall. Near the cannons are a crate with extra cannon balls stored in it, a small barrel, and a bucket. Also located in the area directly behind the forward mast is the winch which raises and lowers the ship's anchor.

The wall around the deck is about six bricks high. On each side of the ship, there are seven holes in the wall, almost directly below its top. Six of these per side are used to shoot cannons through, and are covered with flaps. The seventh can be used to put the anchor through.

At the highest point of the each wall, there are platforms for minifigures to stand on to see over the wall. The tops of the walls have sloped bricks built on them at regular intervals, and the bricks have bones attached atop them.

The front mast is almost as tall as the middle mast, and, to stabilize it, it is attached into the ship's bow. It has two sails, with a small flagpole at the top. Directly below this pole is a small 1 X 4 plat, by which the forestay is attached. The forestay is then attached to both the top and bottom of the bowsprit.

The bow is at a higher level than most of the deck, and is actually higher than most of the deck's wall, requiring it to be raised on this section. There is not much room for minifigures in the bow, as the lowest sail on the front mast gets in the way, and the bowsprit projects from the middle of the floorspace. Connected to the raised section of wall is a fence, decorated with bones, which encloses the bow on the front, and connects to some bricks at the base of the bowsprit.

The ship's figurehead, a burning skeleton, is located under the bowsprit.

The cabin is attached into the rest of the ship by a single joint piece at the base of the mizzenmast, which is hooked on to. At the base of the cabin is a long railing which surrounds three of its four sides. On the left and right, the railing is movable, and the whole thing contains a total of fifteen skull parts built into it. Also at the lowest point of the cabin, on the side not covered by railing, is the doorway into the cabin. It does not have a door. Inside the cabin is a single desk, which overlooks the cabin's large window. The desk has two beakers, a map, and the Jack Sparrow voodoo doll on it. Above the desk on either side is a lamp.

At the lowest level inside the cabin are two small windows, one on the left and one on the right, which overlook the railing on wither side. They are protected from above by red hangings.

Atop the cabin is a small deck which can be removed to access the inside of the cabin, and contains the ship's helm. There is a wall on either side of the helm, both of which increase in height the further toward the rear of the ship they go. The wall is six bricks high at the stern. At the very base of this wall are two lanterns, and there are also two at its topmost section. Each of these is situated directly next to a skeleton, which is hanging from the wall.

At the back of the ship, connecting into the wall, there is a large two-part window. The larger first window is situated near the bottom of the structure, and looks directly into the interior of the cabin. It is covered with a sticker, which depicts a design of flames and skeletons. The section is framed on the left and right by an extra-long bone piece.

The second part of the window is located farther up, looking out over the tiller platform, and is considerably smaller. It too is covered with a sticker depicting flame and skull deigns. It is framed on the left and right by long bones, in addition to a single normal sized bone on each side. Above the window is a skull, and above that is a peg where the bone lantern can connect onto the ship.
The bone lantern connects onto the ship by means of a cone attached to an elephant trunk piece. The lantern itself is large and black, and is covered on two sides by black ribcages.

Jack appears in his captain variation. He has reddish-brown legs, printed with the under edge of his jacket, vest, and sash. His torso is a white shirt with a blue vest. His headpiece is a single moulded piece, which depicts black hair and a dark brown tricorner hat.

Angelica has unprinted black legs, a dark green torso with a green vest, a white blouse, and some gold ornaments. She has white arms, with light nougat hands. Her double-sided head is light nougat, and each side displays a different emotion. Her hairpiece mainly consists of dark brown hair, with a large hat atop it. There is also a small brown flower attached to the hat.

Blackbeard has black legs, with a printing of the lower part of his coat, complete with gold buckles. His chest is black and printed with his coat, as well as two belts. His face is light nougat colour, and is printed with a scowling expression, a black beard, black eyebrows, and black eyes. In between his head and torso is a large beard piece, which is black and bushy, and features burning tapers sticking out from it. Blackbeard wears a black hat, printed on the top with metal buckles.

The Gunner Zombie has unprinted grey legs, and a brown torso. The lower third of the Zombie's torso is printed with a belt with mechanical designs, and an ammo belt runs diagonally across his chest. Across from the belt, a strange sign is printed on him. His head is dark brown, with a stern expression. One of his eyes has a patch over it.

The Yeoman Zombie has unprinted tan legs, and a dark red chest, with orange legs, and brown hands. His torso has a grey belt printed on it, and the primary source of dark red is a vest that covers most of the chest. His head is dark orange, with dark red paint printed on it. The face is double-sided, with a different emotion displayed on each side. His eyes are white, and he has long black hair.

The Quartermaster Zombie has unprinted light grey legs, a dark grey torso with light nougat arms and legs, and printing of a bare chest covering most of his front. A key is also printed their. He has a light nougat head, with a scowling expression. He also has white eyes, and light grey eyebrows.

The Cook has dark brown legs printed with a white apron, and several cooking utensils hanging on string. He has a dark green torso, printed with a dark green jacket, and a white shirt. He has white arms, and light nougat hands. His head is light nougat, and has a relatively cheerful expression the head that was also used on Stan Shunpike. He wears a light tan tricorner hat.

In Pirates of the Caribbean: On Stranger Tides, Queen Anne's Revenge is crewed with zombies, and Blackbeard uses her to travel to the fountain of youth. With his magical sword, he can control the ship, even down to making its rigging act like an extension of his arms. 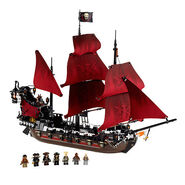 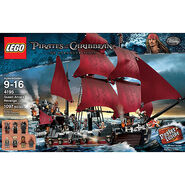 The ship from astern

A Zombie on deck

x12px $249.99 +
Released
April 18, 2011 +
ShopDescription
Set sail for the Fountain of Youth on t … Set sail for the Fountain of Youth on the most dreaded ship on the high seas!</br></br>Captain Jack Sparrow and his motley band of pirates are taking control of the Queen Anne’s Revenge! It’s mayhem and mutiny as they seize the ship from Angelica and her zombie crew. If they only knew that Blackbeard, the pirate all pirates fear, is watching and waiting in the captain’s quarters. This time Jack has gone too far!</br></br>* Includes 7 minifigures: Blackbeard, Jack Sparrow, Angelica, Quartermaster, Cook and 2 pirates</br>* Features large sails, lanterns, fire elements and bone detailing</br>* Detach the captain’s quarters!</br>* Move the cannons!</br>* Steer with the helm!</br>* An essential build for fans of the Pirates of the Caribbean™ film series</br>* Measures over 20" (50cm) tall and 25" (66cm) wide</br>* Includes free poster!nd 25" (66cm) wide
Theme
Pirates of the Caribbean +
Title
Queen Anne's Revenge +
Txt1
Jack Sparrow +
Txt2
Blackbeard +
Txt3
Angelica +
Txt4
Chef +
Txt5
Quartermaster Zombie +
Txt6
Yeoman Zombie +
Txt7
Gunner Zombie +
Txt8
Skeleton +
Txt9
Skeleton +
Type
Set +
USPrice
$119.99 +