Brickipedia
Register
Don't have an account?
Sign In
Advertisement
in: Class 4 articles, Sets listed for ages 6-12, 4000 sets,
and 4 more
English

The main part of the set is the "water bomber" fire plane. The plane is large, has twin propellers and pontoons for water landings. It can hold two minifigures in the cockpit. The plane also has a "water" tank holding transparent blue 1x1x3 cylinders representing water which can be dropped out of a hatch on the bottom of the plane. There is also a hatch on top of the plane to load the water bricks. The set also includes a fire jeep with a water trailer. The water trailer has a pump with a hose and nozzle. Various equipment is stored on the jeep and trailer including an axe, a chainsaw and a fire extinguisher. The last part of the set is two brick-built trees. They have a small base and new trunk pieces holding the leaves. Many flames are also included, to simulate a forest fire. 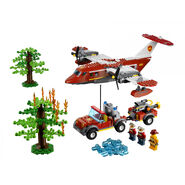 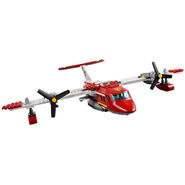