The Dodge Charger (B-body) is a mid-size automobile that was produced by Dodge from 1966 to 1978, and was based on the Chrysler B platform. The Charger was changed slightly for the 1970 model year. This was the last year of the 2nd generation Charger and featured a large wraparound chrome bumper and the grille was no longer divided in the middle. New electric headlight doors replaced the old vacuum style. The taillights were similar to those used in 69, but 500 and R/T models came with a new more attractive taillight panel. On the R/T, new rear-facing scoops with the R/T logo were mounted on the front doors, over the door scallops. A new 440 or HEMI hood cutout made the option list for this year only. 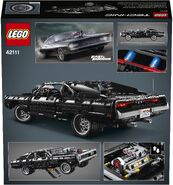 View from back left
Add a photo to this gallery