43177 Belle's Storybook Adventures is a Beauty and the Beast set that was released on January 2, 2020.

Beauty and the Beast is a 1991 American animated musical romantic fantasy film produced by Walt Disney Feature Animation, released by Walt Disney Pictures, produced by Don Hahn, and directed by Gary Trousdale and Kirk Wise. The 30th Disney animated feature film and the third released during the Disney Renaissance period, it is based on the 1756 French fairy tale of the same name by Jeanne-Marie Leprince de Beaumont (who was only credited in the French dub), and ideas from the 1946 French film of the same name directed by Jean Cocteau. Beauty and the Beast focuses on the relationship between the Beast (voice of Robby Benson), a prince who is magically transformed into a monster and his servants into household objects as punishment for his arrogance, and Belle (voice of Paige O'Hara), a young woman whom he imprisons in his castle. To break the curse, Beast must learn to love Belle and earn her love in return before the last petal falls from an enchanted rose or else the Beast will remain a monster forever. The film also features the voices of Richard White, Jerry Orbach, David Ogden Stiers, and Angela Lansbury.

Beauty and the Beast premiered as an unfinished film at the New York Film Festival on September 29, 1991, followed by its theatrical release as a completed film at the El Capitan Theatre on November 13. The film grossed $331 million at the box office worldwide on a $25 million budget and received widespread critical acclaim for its romantic narrative, animation (particularly the ballroom scene), characters and musical numbers. Beauty and the Beast won the Golden Globe Award for Best Motion Picture – Musical or Comedy, the first animated film to ever win that category. It also became the first animated film to be nominated for the Academy Award for Best Picture at the 64th Academy Awards, where it won the Academy Award for Best Original Score and Best Original Song for its title song and received additional nominations for Best Original Song and Best Sound. In April 1994, Beauty and the Beast became Disney's first animated film to be adapted into a Broadway musical.

An IMAX version of the film was released in 2002, and included "Human Again", a new five-minute musical sequence that had been cut from the film prior to its release, but was included in the 1994 musical. That same year, the film was selected for preservation in the National Film Registry by the Library of Congress for being "culturally, historically, or aesthetically significant". After the success of the 3D re-release of The Lion King, the film was reissued in 3D in 2012. A live-action adaptation of the film directed by Bill Condon was released on March 17, 2017. 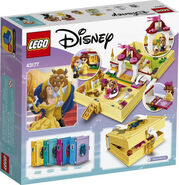