Dragon Bolt is a large, blue and yellow dragon that features an electricity theme. Dragon Bolt’s body features a torso piece on the bottom and the neck that branches off of it has two 3m transparent yellow shells. Its head consists of a specialty glow-in-the-dark brain slug, two yellow horns and a special head piece with dermal armor running up the muzzle. The lower jaw of Dragon Bolt is made out of a hero foot with yellow teeth pieces and two protruding electric bolts. Its wings feature a special ‘flapping’ ability which is created with TECHNIC pieces and rubber bands. These wings feature two yellow blades, three electricity bolts, a black claw piece introduced in Chima on each wing, and a blue dagger piece to cover up the technic beam used for the function. Each leg contains medium-sized blue shells and black claws first introduced in BIONICLE. The tail has two small blue shells and the same yellow horns as the head. It lives in cave possibly near the orgrums 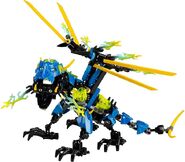 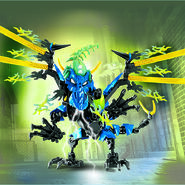 As seen in the TV special

Dragon Bolt about to ambush Rocka