4485 Mini Sebulba's Podracer & Anakin's Podracer is a Star Wars set released in 2003. This set contains additional instructions to build a TIE Bomber when also using additional parts from sets 4484, 4486 and 4487.

The set contains two micro-scale podracers. Each has a cockpit, two engines, and a transparent piece connecting them.
Anakin Skywalker's podracer has a blue body, with two blue lever parts set on either side of it. A light grey stud is set atop the body. The racer's two four-spoked yellow engines are connected to each other by a transparent neon orange piece, which is in turn connected into several transparent pieces which connect to the main body of the racer.

Sebulba's racer has a black cockpit, with orange engines and studs attached to it. The racer also features two orange and black engines, connected together by the same method used for the previous podracer's engine. The engines both have two orange spokes.

Anakin Skywalker frequently raced Podracers on his homeworld Tatooine. He build his podracer secretly, and won the Mos Espa Podrace with it.

Sebulba raced a large, strong podracer. He used it to cheat his way through many podraces. 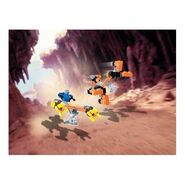