The Star Destroyer is built in various shades of grey, and has a wedge-like shape. The base of the vehicle has many dark grey parts, such as 1X1 studs, vent,s and small plates placed upon it at regular intervals. A light grey binocular piece is set atop some grey plates, pointing forward. The second section of the Star Destroyer, which features the bridge, is a raised section built on dark grey plates at the back of the vehicle. A six-stud long light grey section is set atop the plates.

Star Destroyers are vehicles used by the Galactic Empire, and are named for their capability to destroy entire star systems.

The set in front of box art 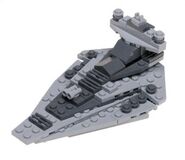