4577 Snake is a green, yellow, and black LEGO Xalax set released in 2001. The set is one of the 9 Racers released separately that year. It also includes a launcher so that the car can be launched.

Snake comes from the second series of Xalax Racers. He is also featured in the game LEGO Racers 2, where he races you on the world of Xalax. 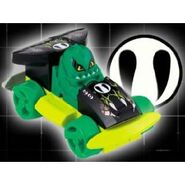