4611 Police HQ is a Jack Stone set released in 2001 which contains 137 pieces. It also includes 5 Jack Stone minifigures, a three story police headquarters building, jail, police helicopter and van and the robber's getaway car. It was one of the first sets to have a light-up sound brick.

Strangely, the bad guy is also a crewman in 4610 Aqua Res-Q Super Station. This may be intentional, or a case of using that 4+ Figure a generic being. 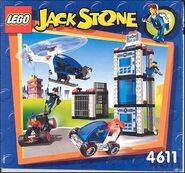