Brickipedia
Register
Don't have an account?
Sign In
in: Class 4 articles, Sets listed for ages 6+, 0000 sets,
and 3 more

462 Rocket Launcher is a Classic Space set released in 1978.

The tractor unit has a rotatable platform with a dish antenna and a control monitor, mounted on its back on a 2x2 turntable. There is also a small satellite/probe which can be attached to the rocket. 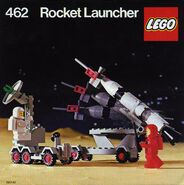