Brickipedia
Register
Don't have an account?
Sign In
Advertisement
in: Class 2 articles, Sets listed for ages 8-12, Harry Potter,
and 3 more

Platform 9¾ is covered by a roof and features a portion of a wall, which contains a revolvable wall segment to recreate the scene where Harry passes through the wall to enter the secret platform. This revolvable segment has a sticker with a ticket machine on one side. There is also a dustbin with a broom, a lamp, and a signpost with the number "9¾" on it. Other items found on the platform comprise a baggage cart with suitcases, a hand truck and a luggage tray with a book.

The Hogwarts Express consists of a steam locomotive and a single rail coach. The locomotive's boiler segment is hollow and can be accessed by flipping up its top. Inside is a treasure chest with keys and a mechanism with a spring that is connected to a lever in the cab. When the lever is pushed upwards, the spring is released and an arm pushes out the chest of luggage.

The rail coach has enough space for all three minifigures to sit inside, but features only little actual furnishing besides some bricks. The top part with the roof and the window rows can be detached to access the interior.

Similarities with other sets

The locomotive and the coach have the exact same design as the ones in the sets 4758 Hogwarts Express and 10132 Motorized Hogwarts Express. The coaches are completely identical while the locomotives have some small internal differences. The locomotive in this set features the chest mechanism that was not included elsewhere and the roof of the boiler consisted of hinged panels and could be flipped open completely. The boiler sections of the locomotives from the other two sets had their (black) front roof completely closed while the cover of the aft (red) segment could be detached. Otherwise their outer appearance was identical. 10132 Motorized Hogwarts Express also featured an additional tender and wheels to fit the track included in the set. 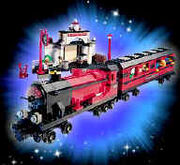 $70.00 +
Released
2001 +
ShopDescription
All aboard the Hogwarts Express!<br … All aboard the Hogwarts Express!<br />Enter Platform 9 3/4™ and you're on your way to Hogwarts School of Witchcraft and Wizardry with Harry Potter™, Ron Weasley™, and Hermione Granger™.Don't worry about getting your bags when you reach the school - press a button and the luggage is magically unloaded! Spin the wall to reveal Platform 9 3/4, and open the compartments to see inside during the journey! Includes Harry, Ron, Hermione, and Kings Cross platform. Train does not run on LEGO train tracks.. Train does not run on LEGO train tracks. +
Theme
Harry Potter +
Title
Hogwarts Express +
Txt1
Harry Potter +
Txt2
Ron Weasley +
Txt3
Hermione Granger +
Type
Set +
USPrice
$49.99 +
Advertisement