Based on a scene from the first movie, Harry Potter and the Philosopher's Stone, the set recreates an early encounter between Draco Malfoy and Harry Potter. The set contains a wheelbarrow for Hogwarts Quidditch equipment and a broom. The remembrall piece is unique to the set, which Harry tries to retrieve from Malfoy.

The minifigures included are Harry Potter and Draco Malfoy. Both are in their 2001 uniforms, with the torso that has the house badge, striped v-necks, and coloured ties. The brooms attach easily to the minifigures' hands and the remembrall is a trans-clear minifigure head that has silver and gold printing. 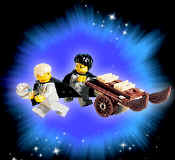 Retrieved from "https://brickipedia.fandom.com/wiki/4711_Flying_Lesson?oldid=1815341"
Community content is available under CC-BY-SA unless otherwise noted.