Brickipedia
Register
Don't have an account?
Sign In
Advertisement
in: Class 4 articles, Sets listed for ages 7-12, Harry Potter,
and 2 more

The first Gringotts set comes in multiple parts and has great variety for playability. It consists of an entrance chamber with a removable counter and two rotating safes, a bank vault, a trolley for transferring treasure to the vaults, a cart on rails, coins, money tiles, and a mysterious parcel that contains the Philospher's Stone. The entrance chamber has a LEGO brick with the word "Gringotts" printed, and the middle section with the counter lifts out. The bank vault is a rocky outcrop LEGO piece because the vault is carved into rock, and has a golden key and a hidden compartment under the bat. The rail piece works by a LEGO Technic mechanism which has a lever that flips over and the pushes the cart down the rail.

The set has four minifigures, Harry Potter in Muggle clothing, Hagrid, a Goblin, and Griphook. 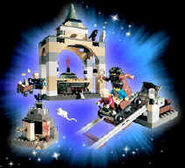 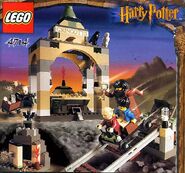