4723 Diagon Alley Shops is a Harry Potter set containing a shop in Diagon Alley, which was released in 2001. The background is cardboard and fixed in place by a base piece. The minifigure included is Hermione Granger in casual blue clothing is exclusive to this set.

A small starter set containing only 80 pieces, 4723 Diagon Alley Shops contains many things a young witch or wizard would purchase for the school year: potions, spellbooks, wizard robes, a cash register, a broomstick, a frog, and a rack with different types of transparent colourful wands, a rat, an owl, a dried scorpion, a crystal ball, and a pink wizard hat.

The set contains a Hermione Granger minifigure in casual blue clothing exclusive to this set. She comes with a cloak, a broom, and her cat, Crookshanks. 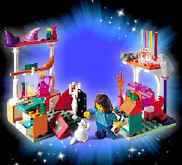