4728 Escape from Privet Drive is a Harry Potter set released in 2002. The set contains the Muggle house where Harry Potter lives with Aunt Petunia, Uncle Vernon, and Dudley Dursley, known as Number 4 Privet Drive. Specifically, this set shows the scene in Harry Potter and the Chamber of Secrets where Ron Weasley arrives in the Weasley's flying car to take Harry to The Burrow. Harry Potter, Ron Weasley, and Vernon Dursley minifigures are included.

Number 4 Privet Drive contains a front door, a brick with the house number "4" printed on it, and Harry's cupboard under the stairs. The kitchen area has a frying pan, and Harry's room has his trunk, a blue and a red book, and a letter. The outside of the house has plants in the garden, and the window of Harry's room can be pulled out by the car. When the chimney stack turns, letters are dropped into the room. Hedwig is also included in this set.

Two versions of the Flying Ford Anglia have been made in LEGO, and the first appears in this set. It is a blue car with a white roof and a chrome-effect grille. It is driven by Ron Weasley and the trunk opens. The car was redesigned for the 2010 version of the Hogwarts Express.

Harry's Escape from Privet Drive as seen in the video game 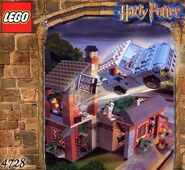 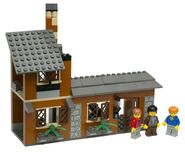