Brickipedia
Register
Don't have an account?
Sign In
Advertisement
in: Class 3 articles, Sets listed for ages 8-12, Harry Potter,
and 2 more

This set is designed to fit next to 4712 Troll on the Loose. While it is the only set dedicated to the Professor Dumbledore minifigure, an area of 4842 Hogwarts Castle has evidence to show it is also depicting the headmaster's office.

The office is a three-story building. Two floors of Dumbledore's Office close up into compact, closed boxes. Each has two wings that open up for accessibility. On the bottom floor, the doors open only when the mechanism under the dragon's head is unlocked using a scorpion key. The other way in is the stained-glass window around the back that lifts up to form a secret entrance.

The top level is a feature that has cogs that make a wheel spin and rotate the fall panel below. A lever is turned to make a disk spin and cause the pattern on the disk to twirl. The middle level contains Dumbledore's office, which was a has a swiveling armchair and a secret hiding place in Dumbledore's desk for his letters. The wall panel behind it, which has a potion cabinet and a stained-glass window, also rotates to reveal a mystery gold key. Dumbledore's table also has the Sorting Hat on it.

The bottom level is reached from the middle level by a moving staircase made of sixteen pie-shaped pieces. Here, there are three keys that hang on the wall of one of the two wings that hang in the lower floor. Attached with small black claw pieces, each key slides out of the wall to reveal tiles printed either as letters or with spells. There is a secret entrance in the back and a scorpion attached to the key to either lock or open the building.

The minifigures included are Harry Potter, Professor Dumbledore, and Professor McGonagall. It was noticeably the only set to contain the McGonagall minifigure until the 2010 release of 4842 Hogwarts Castle. 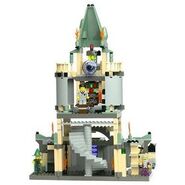