4730 The Chamber of Secrets

The Chamber of Secrets

The set is comprised of the stone face of Slytherin through which the giant serpent emerges, Moaning Myrtle's bathroom, and the actual chamber, which includes Fawkes the Phoenix, the Basilisk, and Tom Riddle's diary splattered with black ink. The minifigures included are Harry Potter, Ron Weasley, Ginny Weasley, Tom Riddle, and Professor Lockhart.

The Chamber of Secrets is one of the larger Harry Potter sets, and certainly one of the larger for the theme at the time. It is composed of four parts: 2 walls, the girl's bathroom, and the statue of the head of Salazar Slytherin. The parts can go together in different ways. At the back of the instructions are ideas for different things that can be made.

This piece of the set, which forms the back wall of the chamber, is the portal though which the Basilisk emerges. As the serpent moves through, it pushes the double doors open. The gate is the face of Salazar Slytherin and has black eyes, and its mouth is shaped and coloured like a dark-grey beard.

The girl's bathroom is the entrance to the chamber. It comes as a two-floor building. On the top level is a sink and a trapdoor which opens up to drop Harry Potter (minifigure), Ron Weasley, and Professor Lockhart into the Chamber. The trap door opens as a ramp, and is covered with smooth tiles so that they slide down.

The Chamber of Secrets

The actual chamber is made up of two sides that hinge together to make a long chamber. On the left part of the chamber, if you push a piece in two snake-panel doors are flipped opened. This will reveal the hidden sword of Gryffindor on Sorting Hat. On the right part of the chamber, pushing a lever will collapse two snake-panel walls. Both of the walls are covered in gaping snake mouths. They have snakes held up on the sides, and torches illuminating the walls. Along the tops of these are twin snake shields, with arches and towers. There is a small slot on each wall from which snakes can emerge.

The minifigures included are Harry Potter, Ron Weasley, Ginny Weasley, Tom Riddle and Professor Lockhart. Lockhart in his lilac robes is unique to this set. Ginny Weasley (until the release of 4840 The Burrow and 4841 Hogwarts Express) and Tom Riddle were exclusive to this set. The creatures Fawkes the phoenix and the Basilisk are also exclusive.

In Harry Potter and the Chamber of Secrets, students were being petrified and nobody knew why. After investigation, Harry Potter (Minifigure), Ron Weasley, and Professor Lockhart journeyed into the Chamber of Secrets, where Lockhart betrayed them. After a shower of boulders, Harry was left to go on alone, where he found Ginny and Tom Riddle's Diary. He was forced to fight the Basilisk, which he defeated with the help of Fawkes and The Sword of Gryffindor. 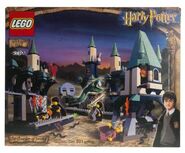