4731 Dobby's Release is a Harry Potter set that was released in 2002. It is based on the scene in Harry Potter and the Chamber of Secrets where Harry Potter tricks Lucius Malfoy into freeing the Malfoy's slave, the house-elf Dobby. The set is comprised of a small room in Hogwarts with Dobby and Lucius Malfoy minifigures. Tom Riddle's diary with a sock inside is also included. It has 70 pieces.

The corner of Hogwarts Castle that the set takes place in has two torches and a brick that slides across to hide the shelf. A rare Gryffindor sock piece is hidden inside the Tom Riddle's diary book piece (also included in 4730 The Chamber of Secrets).

This set includes the first version of Dobby, whose head is molded but unprinted. His clothing is printed onto a monochrome figure. As house-elves are shorter than humans, Dobby has short unposeable legs. The other minifigure in this set is the 2002 version of Lucius Malfoy. 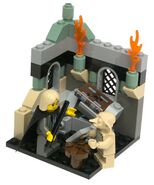