Brickipedia
Register
Don't have an account?
Sign In
Advertisement
in: Class 4 articles, Sets listed for ages 6 - 10, 2004 sets,
and 2 more

Harry and the Marauder's Map

4751 Harry and the Marauder's Map is a Harry Potter set released in the year 2004. It is a recreation of the scene in Harry Potter and the Prisoner of Azkaban where Harry Potter sneaks through the One-Eyed Witch Passage in Hogwarts to Honeydukes Sweets Shop in Hogsmeade.

The set comes with Harry Potter carrying his wand casting off light with his Invisibility Cloak and the Marauder's Map, Professor Snape, and the Humpbacked Witch Statue.

The set contains a Hogwarts corridor and an underground passage the entrance to which is guarded by a statue. You reveal the hidden passageway by inserting a wand into a Technic brick. This releases a locking mechanism so the statue's platform slides back, creating a passageway that a minifigure can fall through to reach the area below. The set comes with an orange spider, a green plant piece, and the Marauder's Map tile. 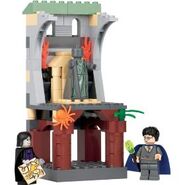