4754 Hagrid's Hut is a Harry Potter set released in 2004. The set depicts Hagrid's home on the grounds of the Hogwarts school. It is mainly based on how the Hut appears in the third installment of the Harry Potter franchise, Harry Potter and the Prisoner of Azkaban. This set is the second LEGO rendition of Hagrid's hut after 4707 Hagrid's Hut from 2001. The set contains the minifigures Rubeus Hagrid and Hermione Granger. It has 302 pieces.

The new design for the sloped stone cabin swaps the dark-green roof trimmings for the Sand Green pieces that are now an established mark of Hogwarts Castle architecture in the LEGO sets. The new chimney stack section is assembled separately and then attached to the main hut with LEGO hinges

Unlike 4707 Hagrid's Hut, the number of sides of the structure was reduced from eight to four. This solved an engineering issue with the roof and meant that plastic bricks rather than paper could be used for the slanted sections. This represented a leap forward in the set because the previous paper roof had been tricky for some young fans to assemble. The new quadrilateral hut is packed with details and accessories, such as a spider swinging out when a cupboard is opened, a hidden compartment in the fireplace that hides a book, an extra doorway, a crossbow, a bat, a cauldron with a ladle, a yellow goblet and red and white cups, a yellow plate, and a mottled, chrome-brass key for Hagrid. When opened out, the hut creates a patchwork floor. The sloped bricks create a sense of an ancient hut,and sand-green tiles patch up the roof, the walls are now decorated with different coloured bricks, and there is a hidden compartment in the chimney. 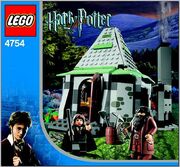