Brickipedia
Register
Don't have an account?
Sign In
Advertisement
in: Class 3 articles, Sets listed for ages 8-12, Harry Potter,
and 2 more

4757 Hogwarts Castle is a Harry Potter set released in 2004. This is the second LEGO rendition of Hogwarts Castle and is based on its appearance in Harry Potter and the Prisoner of Azkaban. One of the features that sets it apart from all LEGO versions of Hogwarts past and to come is the motorized mechanisms in the front entrance that connects the clock face, a large pendulum, and the gearing that opens the entrance doors. It has 928 pieces.

This second version of the castle continues the LEGO Hogwarts tradition of being made up mostly of sand green, tan, and grey LEGO bricks, but has a layout very different from its predecessor and uses more grey for the roofing. Rather than a chain of towers, this castle set consists of three separate buildings. These are the Gatehouse, the Main Hall (which can be split into three separate towers), and Gryffindor Tower. The set inlcudes nine minifigures: Harry Potter, Ron Weasley, Draco Malfoy, Professor Dumbledore, Professor Trelawney, a Skeleton, and two Dementors.

The whole castle itself is very similar to the one from the third movie. It consists of three separate buildings: the Gatehouse, the Main Hall (which can be split into three separate towers), and Gryffindor Tower.

The gatehouse is a small gate at the front of castle. Following the events of Harry Potter and the Prisoner of Azkaban, the gate is guarded by two LEGO Dementor minifigures. This is probably meant to be the gate to Hogsmeade, the small village next to Hogwarts Castle.

The Main Hall can be split into three separate towers. The focal point of the main hall is the middle area of the Pendulum Hall. The hall incorporates a LEGO Technic motorized mechanism with cogs that connect to the clock face, a large pendulum, and the gearing that opens the Great Entrance doors. A lever on one side of the entrance causes the pendulum to rock, and a lever on the other side winds up the door grille. Whenever the motor is running, the clock face turns. and the left-hand tower has a Potions classroom in the dungeon, a room for homework, and a trunk in the attic. The right-hand side has a dungeon, Professor Dumbledore's office in the middle, and Professor Trelawney's divination classroom in the turret, including crystal balls (one with a skull inside) and cups for reading tea leaves. There is also a hidden room with a rotating blackboard with a skeleton behind it in the small turret on the side. There are moving staircases, potion bottles, spider webs with spiders, and quills in Dumbledore's office.

The Gryffindor Tower in this set as four main floors. The bottom floor is the common room, which can be reached by going through the revolving portrait of the Fat Lady, which has been ripped following the events of the book/film. The common room has a table with a letter and an ink bottom on it. The dormitory level is above, with a bed in each wing and a secret compartment in the table. The room above has two torches, and the room in the turret contains a rat.

The set minifigures nine minifigures: Harry Potter, Ron Weasley, Hermione Granger, Draco Malfoy, Professor Dumbledore, Professor Trelawney, a Skeleton, and two Dementors. Harry's minifigure appears again in 4753 Sirius Black's Escape with a black cape (the same is true for Hermione and 4754 Hagrids Hut), and his accessory is his dark stone wand. Ron is unique to this set, and his accessory is his light grey wand and Hermoine's accessory is her old dark grey wand. Draco's accessory is his broom, and his particular green Quidditch uniform is also unique to this set. Trelawney is not seen anywhere also besides this set. Dumbledore's variation is also exclusive to this set, and he has no accessory but he has a pink cape to go with his pink robes. The Dementor minifigures have grey hoods, sand green skeleton bodies with green heads and gaping mouths, and grey cloth cloaks, however, Dementors had actually black ragged capes and hoods in the movie. This was changed in 2010 and 2011 in both 4842 Hogwarts Castle and 4867 Hogwarts. 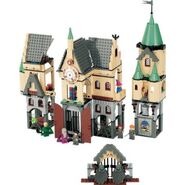 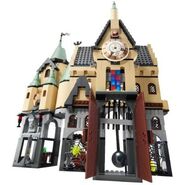 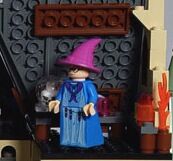 Trelawney in her office