4758 Hogwarts Express is a Harry Potter set released in 2004. It is the second model of the train that takes wizarding students to Hogwarts Castle, being previously represented in set 4708. Along with the train, the set also includes a Hogsmeade Station platfrom and trolleys.

This version of the Hogwarts Express mainly represents the train's appearance in the third Harry Potter installment, Harry Potter and the Prisoner of Azkaban, specifically the scene in which the students on the train encounter a Dementor searching the train for Sirius Black, which Professor Lupin defends them from.

Noticeably, basically the same model of train from this set was used in 10132 Motorized Hogwarts Express, except with a motorized mechanism to make it run and minor differences. The minifigures Harry Potter, Ron Weasley, Professor Lupin, and a Dementor are included.

The Hogwarts Express consists of a steam locomotive and a single rail coach. The locomotive's boiler segment is hollow and the cover of the red section can be detached. Inside is a mechanism that consists of a sliding plate with embers (transparent orange pieces) on one end to fire the boiler. The inside of the engine features hidden accesories; the Monster Book of Monsters, a moneybag, and a piece of chocolate. The rail coach has enough space for all three minifigures to sit inside, but features only little actual furnishing besides some bricks. The top part with the roof and the window rows can be detached to access the interior.

The platform is covered by a small roof and features a bench, a hand truck and a lamp with a sign that has the word "Hogsmeade™". This is the only printed part in this set, other labels are stickers.

Harry, Lupin, and Ron all have wands, and the set also includes an owl (presumably Hedwig) and a Scabbers. The Dementor has a fabric body cloak and Sand Green skeletal body. The Dementors are supported by a single leg, which remains hidden by their cloak.

The coach in this set has the exact same design as the ones in the sets 4708 Hogwarts Express and 10132 Motorized Hogwarts Express, while the locomotives in each set have some small internal differences. For example, the locomotive in this set features a sliding mechanism that was not included elsewhere. In addition, the boiler sections of the locomotive here and in the motorized version have their (black) front roofs completely closed while the cover of the aft (red) segment could be detached. Also, in 4708, the roof of the boiler consisted of hinged panels and could be flipped open completely, but otherwise the outer appearance was identical to the others. 10132 Motorized Hogwarts Express also featured a tender for the motor. 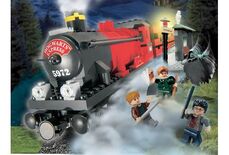 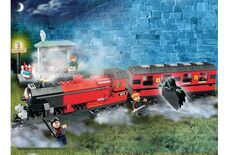 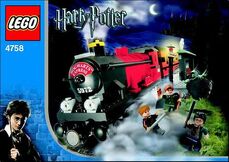 
Dementor +
Pieces
389 +
Price
US $39.99 +
Released
2004 +
ShopDescription
'Take a trip on the Hogwarts™ Express! … Take a trip on the Hogwarts™ Express!</br></br>Harry and Ron meet their new teacher, Professor Lupin, on board the Hogwarts™ Express -- too bad there's a dementor™ on board too! Lift the top of the boiler off and pull the handle in the steering house to reveal a secret compartment! Top comes off the passenger car so you can put Harry and his friends inside the train. Includes Hogsmeade Station, Harry Potter™, Ron Weasley™, Professor Lupin, and a dementor. Train does not run on LEGO train tracks but can be modified accordingly.in tracks but can be modified accordingly. +
Theme
Harry Potter +
Title
Hogwarts Express +
Txt1
Harry Potter +
Txt2
Ron Weasley +
Txt3
Remus Lupin +
Txt4
Dementor +
Type
Set +
Advertisement