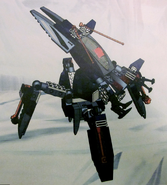 
Ogel has … Challenge evil Ogel!<br />Ogel has succeeded in his master plan, and only one thing can stop him now: the Alpha Team Blizzard Blaster!* Features a thermo cannon you can launch.* Initiate Alpha mode - turn the Blizzard Blaster into the sleek, fast Ice Shark for travel over water. No need to take apart and rebuild!* Includes Alpha Team special agent Zed.!