Brickipedia
Register
Don't have an account?
Sign In
Advertisement
in: Class 4 articles, Sets listed for ages 7+, 2005 sets,
and 2 more

4774 Scorpion Orb Launcher is a LEGO® ALPHA TEAM™ set released in 2005. It contains 227 pieces and instructions for several alternate models.

The Scorpion Orb Launcher is designed to look and act like a scorpion. It can have its stinger loaded with an Ice Orb to launch and is piloted by a Super Ice Drone. The set also includes a hang glider with Flex with skis. 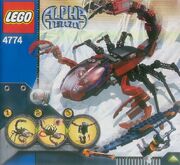 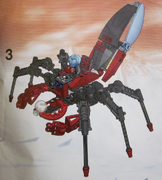 An alternate model resembling a spider

An alternate vehicle for Flex

An alternate model resembling a kangaroo

Another vehicle for Flex

An alternate model that appears to be a robot