Brickipedia
Register
Don't have an account?
Sign In
Advertisement
in: Class 3 articles, Sets listed for ages 7 - 14, 4000 sets,
and 2 more
English

4840 The Burrow is a Harry Potter set released on October 1, 2010. This set recreates the home of the Weasley family, and is made up of a large, three-story model of the house, a mechanical fireplace, and a marshland with reeds and a catapult.

The Burrow was the family home of the Weasley family, located on the outskirts of Ottery St Catchpole in Devon, England. It was a thoroughly magical dwelling that became a second home to Harry Potter. A barn stood nearby.

The Burrow was held up with magic and is very cluttered inside, but very welcoming at the same time. It was also stated that it was quite near to the Lovegood House In 1997, following the death of Albus Dumbledore, the Burrow became the Headquarters of the Order of the Phoenix. The Weasleys were forced to abandon their home during the height of the Second Wizarding War when they became targets of the Death Eaters.

This set is based on the Weasley's house's appearance in the sixth installment of the Harry Potter franchise, Harry Potter and the Half-Blood Prince, specifically the scene in which the Burrow is attacked by Death Eaters who then set it on fire. The set includes six minifigures: Harry Potter, Arthur Weasley, Molly Weasley, Ginny Weasley, and the villains Bellatrix Lestrange and Fenrir Greyback.

The Burrow's crooked structure was challenging for LEGO designers, but the team created a stable shell that is simple to build. They then added asymmetrical elements and planks to the exteriror to give the impression of a lop-sided structure.

The Burrow is a three story, "twisted" and asymmetrical house. The focal point of the interior of the house is the kitchen, the bottom floor. The kitchen has stacked dinner plates, cabinets that contain food, a grandfather clock, and a spinning light fixture. There is also a broomstick and a table with two benches for minifigures to sit on. The table has golden goblets, red cups, and a plate with cherries on it. There are swiveling chairs and a printed brick of the Daily Prophet newspaper with the breakout from Azkaban as the main story. The floor above is Ron's room where Harry stays in, and as such Harry's trunk (which contains socks) and owl Hedwig can be found, along with bunk beds. A poster of the Chudley Cannons, the Quiddich team Ron supports, is above the top bunk. The floor above is Ginny's room, with a bed, a lamp, The Quibbler newspaper on the attic window seat, and a poster of the Gryffindor Quidditch team.

This set includes a mechanical fireplace that creates the illusion of a minifigure disappearing through the Floo Network. One turn of the handle tilts the minifigure and reveals the emerald flames of burning Floo powder. Turning the handle back restores the back of the hearth and the original flames—and the minifigure is gone.

To represent the Death Eater attack from the sixth movie, LEGO includes an area of marshland with a catapult to help either Bellatrix Lestrange or Fenrir Greyback launch flaming torches at the house. The reeds are tall enough to hide a minifigure.

The set contains six Minifigures: Harry Potter, Ginny Weasley, Arthur Weasley, Molly Weasley, Bellatrix Lestrange, and Fenrir Greyback. There are also two owls and a pig. Three of the minifigures, Arthur, Molly, and Bellatrix, are not seen anywhere else in theme, and this particular version of Ginny in casual clothes is unique to this set. The Harry Potter minifigure appears in both this set and 10217 Diagon Alley, and in 4841 Hogwarts Express with grey pants instead of black pants. Harry, Ginny, Bellatrix, and Fenrir all have reversible faces; Harry can look happy or determined, Ginny can smile or frown, Bellatrix can look excited or have a look of mock sympathy (as if she is taunting Harry), and Greyback can have his mouth closed or have his teeth bared. 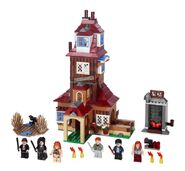 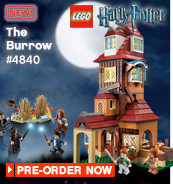 The Burrow in the video game.

The Burrow kitchen at Toy Fair.

Interior of The Burrow at Toy Fair.

The side of the house at Toy Fair.

The Floo Network at Toy Fair.

Toy Fair preview of the marshland.

The pig in the sty at Toy Fair.