4854 Doc Ock's Bank Robbery is a Spider-Man 2 set released in 2004. It represents the bank robbery that was carried out in Spider-Man 2 by Doc Ock. Five Minifigures are included along with a bank, bank vault, trike and police car. Spider-man has a web piece. This model can be rebuilt into another bank model, although this model was not mentioned in any of the LEGO Magazines like most of the alternate models.

In this scene, Doc Ock robbed a bank so he could continue his research, and took Aunt May with him to distract Spider-Man. 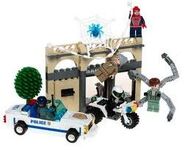 Retrieved from "https://brickipedia.fandom.com/wiki/4854_Doc_Ock%27s_Bank_Robbery?oldid=1973894"
Community content is available under CC-BY-SA unless otherwise noted.