Brickipedia
Register
Don't have an account?
Sign In
Advertisement
in: Class 3 articles, Sets listed for ages 7-14, 4000 sets,
and 2 more
English

4867 Hogwarts is a Harry Potter-themed set that was released on June 1, 2011. The set is another incarnation of a section of Hogwarts Castle, but primarily focusing on the scene in Harry Potter and the Deathly Hallows Part 2 when the Death Eaters attack the castle in an event known as the "Battle of Hogwarts".[1]

This is the fifth LEGO set to represent Hogwarts, but only represents a small portion of the actual castle. Measuring 12" wide and 10" tall and costing $49.99,[2] this set is the smallest and, given its size, least expensive of all the LEGO Hogwarts versions to date.

A feature of the castle is that Technic holes and hinges allow it structurally to combine with the Hogwarts set from the previous year, 4842 Hogwarts Castle. The minifigures of Harry Potter, Remus Lupin, Gregory Goyle, Neville Longbottom, Professor Sprout, Lucius Malfoy, and a Dementor are included.

This set is comprised of two Hogwarts towers and the bridge between the two.

Defence Against the Dark Arts Tower

The top of the Defence Against the Dark Arts Tower is the Room with the Mirror of Erised. Below this is Professor Lupin's office with a chair, desk with a ink bottle with feather, a skull, a white capped blue potion bottle, and a blackboard. The floor below this is the Room of Requirement, as seen in Harry Potter and the Order of the Phoenix as Dumbledore's Army's practice area, with two portraits of a witch and a wizard. The bottom floor is the dungeon, with the ceiling so low that a minifigure may not be placed within.

The top floor of this tower is the divination classroom, with a crystal ball and tea cups for tea leaf reading and little tables holding each of them. A floor down is the astronomy tower containing a grey globe of what seems to be stars. The floor below this is the Griffindor boys' dormitory, with a removable scarlet and golden Gryffindor-coloured bunkbeds. The bottom floor is another dungeon, but with a green snake to represent Nagini.

The bridge connecting the towers is a long, plank-like feature with stairs leading up to it. A lever below will cause the ground to shoot up and the minifigure standing will be thrown upward revealing fire beneath. This bridge is the iconic Viaduct bridge from the film adaptions.

The minifigures of Harry Potter, Remus Lupin, Gregory Goyle, Neville Longbottom, Professor Sprout, Lucius Malfoy, and a Dementor are included. Noticeably, it is the first (and only, to date) set to have Professor Sprout as a minifigure, and the first set to have Goyle with flesh-coloured skin. It is also the second set where Neville Longbottom is included, and, coincidentally, the second set to have both Neville and Lupin included together. 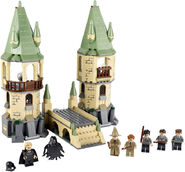 The Gryffindor Dormitory part of the set 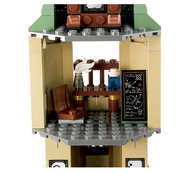 The Divination classroom in the top of the right tower

Advertisement for the castle (set 4842 is in the background

Another advertisement for the set at the LEGO shop

A view from above

The outside of the set

Interior of the first tower

Interior of the second tower

The globe in the first tower