4868 Rahaga Gaaki is a BIONICLE set released in 2005. It included a silver Rhotuka Spinner, a Rhotuka Launcher, Gaaki herself, and her staff. She was one of the six Rahaga released. She was originally a Toa Hagah, but a set was never released of her in Toa Hagah form. This set contains 28 pieces. 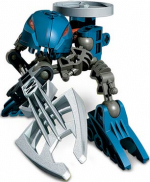 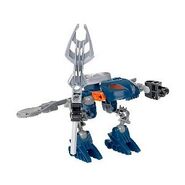