4870 Rahaga Kualus is a BIONICLE set released in 2005. It comes with a white Rhotuka Spinner, a Rhotuka Launcher, Kualus himself, and his staff. He was one of the six Rahaga released. He was originally a Toa Hagah, but a set of his Toa form was never released.

Kualus was the Rahaga of Ice. He was originally a Toa Hagah, but during an attack on the Visorak he along with the other Toa Hagah were captured and transformed into "Rahaga" by Roodaka. Years later he and the other Rahaga was found by the new Toa, who defeated the Visorak and restored them to Toa Hagah. 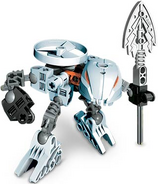 Retrieved from "https://brickipedia.fandom.com/wiki/4870_Rahaga_Kualus?oldid=1967169"
Community content is available under CC-BY-SA unless otherwise noted.