The set includes Emmet in the pajamas (or pyjamas as they are referred to as in the set and the film's other tie-in media) he is seen wearing at the beginning of the movie. He is composed of four pieces, only one of which is exclusive to him. His torso and legs have been seen on the minifigure Sleepyhead, and the hair has been seen on almost every other Emmet minifigure (with the Hard Hat, Robot Disguise, and Western variants being the odd-men out). The head is double sided with one side showing a winking smile (can be seen on the polybag package) and the other with a closed-eyes yawn. 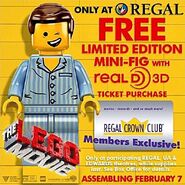 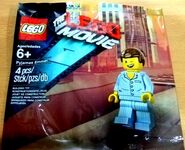